Mar,1, 2015 ~ It appears that these false charges have been dropped against Mr Barber. We have decided to leave this story up not because Mr Barber is guilty (we knew he wasn’t all along) but as a cautionary tale of what can go wrong when “rescues” get over zealous & when prosecutors charged with upholding the laws don’t fully understand them

Former 30 yr veteran animal control officer Wally Barber charged with animal cruelty after euthanizing his own goat. He is also charged with discharging a firearm within city limits. Yes he used a gun, that is how it is done on the farm, how it’s always been done.(Think “Old Yeller”)

This was a family pet for over 2 generations of kids, so it was short on years, after a neighbor called to complain (uncomfirmed) police showed up to come take a look. 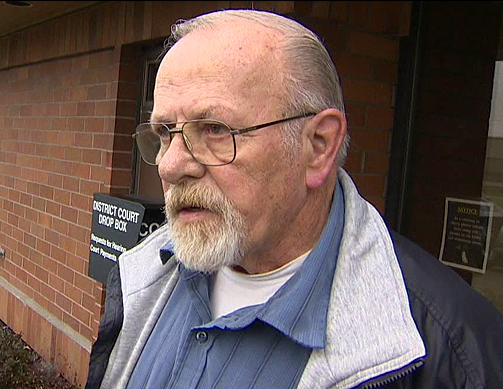 Shortly after that Wally took his beloved friend & put him down & buried him.

It is horrifying to think about, but what he did was perfectly within the Federal Laws (which our state law cites to)

USC Annotated. Title 7. Agriculture. Chapter 48. Humane Methods of Livestock Slaughter § 1902. Humane methods
No method of slaughtering or handling in connection with slaughtering shall be deemed to comply with the public policy of the United States unless it is humane. Either of the following two methods of slaughtering and handling are hereby found to be humane:
(a) in the case of cattle, calves, horses, mules, sheep, swine, and other livestock, all animals are rendered insensible to pain by a single blow or gunshot or an electrical, chemical or other means that is rapid and effective
CREDIT(S) (Pub.L. 85-765, § 2, Aug. 27, 1958, 72 Stat. 862; Pub.L. 95-445, § 5(a), Oct. 10, 1978, 92 Stat. 1069.)

I know Wally Barber, a 30 yr veteran of Snohomish County Animal Control & I dare say our first meeting was much less then friendly. Someone had filed a false complaint against me but he wanted proof it was false & finally I showed him what he wanted to see & after pretty much a screaming match I figured out that he was actually a good guy.

I have to say that realization came because of him, he knew our dealings were going no where fast & so he asked to start over & that is what we did. After that point he was the guy I called when I got info about people & animals in trouble. This is a man who actually cared about both animals & people so I knew if I called on him for help the person would be treated fairly as well. He is no pushover but he is fair.

So Pasado’s got involved to get a few moment of media spotlight on an issue that had nothing to do with them: Or did it? Anyone who knows the Pasado history should be suspect of anything they get on board with. These are the same folks who left a dog to starve to death

Please don’t ever forget the Hamiltons…
Pasado’s basically broke into their house & shortly thereafter the husband died of a heart attack, so his wife Margie has been left to face this alone & got shafted because she didn’t have any fight left in her. These are people who were highly respected in the dog community who’s lives were destroyed by these illegal activities. It was not a good situation for the dogs but it was an illegal entry & it should’ve been handled so much differently, if they hadn’t broken & destroyed her she could’ve had the whole case thrown out.

As I always say: Consider the source before jumping to conclusions… It also begs the question: If I ~ A non-attorney, can find the law showing what he did was not illegal who is the cop or prosecutor who thought these charges were going to stick? Are they going to try to railroad him? I have tried to put his family in touch with a few folks who can handle this & have contacted a few other associations so we will wait to see how this nonsense plays out.

I do have other information but I’m going to wait until this gets into the proceedings before I say it so it is not used against Mr Barber, or in case he needs to use it to defend himself.

Well We’re Back Trouble With Our Hosting Provider

View all posts by Brandia →

Please take a moment to help support my work. I don’t hide the news behind a paywall, but I desperately need your support to continue